Uncertainty in the job market – what unemployment flow rates reveal

Every month in parts of our inner cities,  nearly half of all job seekers go onto or come off the unemployment register.  That ‘churn’ – where so many are moving into and out of work – creates uncertainty and stress. 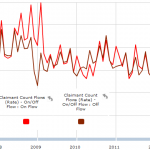 shows the gap between the flows onto job seekers’ allowance and the flows off.  The chart shows that at the height of the economic crisis in 2008/9 – on flows soared and off flows did the same – in the opposite direction. Unemployment rose dramatically.

More recently (since March) off flows have exceeded on flows consistently – and clearly that’s good.  Of course, we can’t be entirely sure that this wholly reflects the state of the economy because people come off the register for reasons other than that they have found a job. But generally most movement will be into and out of work.

However, the rate of churn conceals the unemployment numbers. 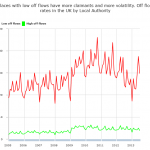 If we compare places where the off rate is very high, with places where it is low, then as the second chart shows, low rate places tend to have far more claimants and they tend to display far more volatility. In other words, although a place like Birmingham might have comparatively low rates of flow onto and off job seekers allowance, the numbers impacted are large. Conversely, places with high flow rates have comparatively few claimants.  The explanation is in part that high flow places tend to be agriculture or tourism dependent.

But whatever the location, it is perhaps the uncertainty amongst claimants that the numbers mask.  There are places where nearly half of
all job seeke 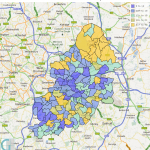 rs regularly come off JSA / go on to JSA.  That is bound to make the neighbourhood ‘edgy’. For example, in Birmingham – a place with a large number of job seekers but whose overall rate of churn is relatively low – there is one small area where nearly 42% of all claimants came onto the register last month (July). That place is the area in the far North East of the City on the map here. 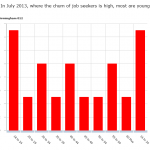 And sadly in this part of Birmingham, the majority of those job seekers are young.  This is evident in the final chart.

Today therefore, there are more people coming off the job seekers register than going on – that’s encouraging. But, the levels of uncertainty in the job market are high – far too many people are regularly coming on / going off job seekers allowance . That’s particularly troubling in those places where young people are badly affected.  Nervousness about the job market creates stress – which the young are ill prepared for.