IMD stands for Index of Multiple Deprivation (IMD).   IMD is a data based (i.e. it’s based on data),  statistically robust, reasonably accurate window on the conditions found in areas in the UK, that house between 1,000 and 3,000 people.  And here’s the killer point – IMD covers everywhere.  So at one extreme it is the Index of Multiple DEPRIVATION, but at the other, a better title would be the Index of Multiple WEALTH.  Or better still: Better Micro-Targeting

IMD covers 8 topics (7 + a total), which identify levels of wealth and deprivation in around 35,000 small areas of England (There are different IMDs in Scotland & Wales).

First thoughts suggest that we’re dealing with 280,000 data points.  So, this is not ‘big data’.  There are real useability challenges however.  For example:

In short, IMD is a great example of great (but not big) data which is limited by the tools available to use it.

In a very British way, perhaps we ought to apologise for showing how we manage IMD better than others.  So, we’re sorry – but it’s time not to be shy about G-View. 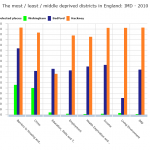 This chart compares three districts in England across all 8 topics or domains.  Wokingham is the second most privileged place in England; Hackney is almost the least privileged. Bedford represents a mid-point.

But these are BIG areas. This article is about MICRO-targeting. So let’s get micro.

It’s important to get micro because in cities particularly, the rich and the poor live cheek by jowl. Walk round the corner and you could be in a different world.

This video homes in on Hackney – one of the most deprived large places in England but which captures real differences.  The video moves speedily across all 8 ‘domains’ and you can see how widespread differences are. Note the legend.  Yellow places are WEALTHIER.